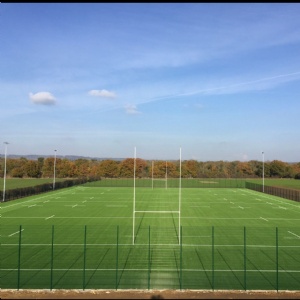 The official opening of the new 3G Rugby pitch and sports fields at Vizards was marked on Thursday 30th March with a series of special rugby matches for Years 7, 8 and 9 against their counterparts at Tonbridge Juddians RFC (TJ’s).

The event was attended by many of those who had been involved in the project, parents and friends. In his welcome address, Headmaster, Robert Masters, thanked everyone who had given invaluable input into the long process of purchasing and converting the former farmland into a sporting facility to be proud of. The official ribbon cutting ceremony was performed by David Vizard, Mary and Paul Lamb who were representing the H D Vizard Trust, former landowners, to whom the school owes a debt of gratitude.

The 26 acre site is adjacent to Haysden Country Park, less than half a mile away from the main school in Brook Street and boasts a 3G all-weather rugby pitch, alongside natural turf pitches for rugby and cricket. The playing fields have been purchased and developed through the kind generosity of parents, Old Juddians and friends, who support the school’s Development Fund as well as Kent County Council.  Judd have vacated their former playing fields at Yeomans to facilitate the relocation of Ridge View School into purpose-built accommodation ready for September 2017.

Mr Masters said “The Judd School has always had a strong reputation in the sports arena and I am delighted that our students now have such a fantastic facility in which to train and play. I am also pleased that we have been able to help Ridge View School find a new site, as they had been looking for suitable land for some time”.

In addition to being used by Judd, the 3G pitch at Vizards will be used by Tonbridge Juddians on weekday evenings and Sundays, during the rugby season, as well as by other community sports groups.